The United States beat Russia to the moon in a race that was estimated to have cost NASA $20 billion dollars. A global race is once again taking place except this time it’s a more private affair. It is almost 5 years since the Google Lunar X Prize was announced and 26 privately funded teams are competing to claim the $20 million prize. The pressure is on! If a government reaches the moon first, a whopping $5 million is slashed off the top prize. The prize aims to kickstart a commercial lunar exploration sector. This concept has worked before when SpaceShipOne won the Ansari X Prize in 2004 and is now the plane of choice for Richard Branson’s Virgin Galactic. This morning, I caught up with an Irish member of the international team based in the Netherlands, White Label Space, to find out about the prize and his team’s progress.

Simon O’Reilly, a mechanical engineering graduate of Trinity College Dublin, is a recent member of the White Label Space team. In a volunteer capacity he is the PR manager and is also involved in running some of the necessary mission simulations. In order to get the prize O’Reilly explained that the team must “get to the moon, drive 500 metres while beaming high-definition footage back to earth”. An added complication is that “carrying out the mission itself costs about $47 million”. I was amazed to discover that $25 million of the total sum would be spent just on fuel to propel the rocket to the moon. Taking into account the cost of the project, the prize doesn’t seem as large. The purpose of having a relatively small prize is “to try to challenge people to make it cheaper and cheaper all the time”. 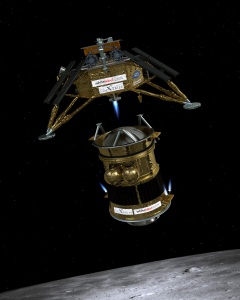 Having a keen interest in astronautics, theoretical physics and astronomy, O’Reilly was excited when he heard about the Google Lunar X Prize. He had the initiative to contact a number of the teams, offered his support and was delighted to be included in the White Label Space core team. He has to juggle his volunteer work with the project and his Masters in Aerospace Vehicle Design. This extra work should pay off when their rover is ambling around the moon’s craters.

White Label Space have an interesting funding proposal. Rather than seeking out investment like most of the other teams, they have an advertising strategy. “White label is a branding term”, O’Reilly explains. They intend to sell advertising and challenge companies to be the first to advertise on rockets, ramps and rovers. The HD camera is an example of how this could work “by providing a camera for the mission as well as associated sponsorship”. A camera manufacturer would be an ideal partner in this case. The team are hopeful that associated brands will become “a new step in the space race, Space 2.0”.

With so many teams working on the prize, short timelines are essential. White Label Space already have a working rover prototype as well as a smaller, lighter rover weighing just 10kg in development (see video below). This work is being led by Professor Kazuya Yoshida in Tohoku University in Japan. The next phase of the project includes testing the landing stage motor in June. This is the hardest part of the entire mission as it needs to land perfectly on the moon to allow the rover to successfully exit the craft.

A mission to the moon is multi-faceted and includes building, designing and testing rockets, rovers, cameras, antennae, communication devices and the list goes on. If you aim to complete all of the bonus categories for an extra few million dollars, additional equipment must be included. Surviving the extreme temperatures of a lunar night is one of these challenges. Lunar nights are almost as cold as liquid oxygen. Rovers are encouraged to stop off for some sight-seeing on their journey. A visit to an Apollo site lands them a bonus prize. The deadline for the race is the end of 2015 and it would be great to see a team with Irish involvement beaming footage from the moon. Science Calling wishes O’Reilly and White Label Space the best of luck!