This is a fascinating book, but to try to review in 800 words is a tall order! It covers an astonishing breath of areas and ideas – but to tie in with the recent themes of gender, I will only summarize Pinker’s main conclusions and his treatment of issues relating to this perennial hot potato.

First, the general thrust of the book is to argue that everything that modern science tells us as regards the human race refutes the three theories that dominated much of 18th – 20th century thought: empiricism (aka “The Blank Slate” – that humans have no innate traits), romanticism (aka “The Noble Savage” – that humans are good by nature, but are corrupted by society) and dualism (aka “The Ghost in the Machine” – that humans have a soul that resides in the mind that makes choices outside of physical reality”). The first quarter of the book gives an overview of these three theories, their history and how they influenced western thought. Referencing discoveries in genetics, neurobiology, evolutionary biology and more, Pinker pretty much demolishes these theories effectively.

What science tells us about humans, Pinker argues, is that we are social animals, the product of millions of years of evolution, with a distinct and powerful innate nature. While environment and chance clearly play a key role in the unfurling of each individual’s life, we navigate the world with the hardware and software endowed to us by aeons of natural selection. Denying our human nature leads to misguided conclusions in fields as diverse as social policy (criminal justice, architecture, parenting) to the arts (modern art and postmodernism) to social engineering (communism or totalitarianism). The remainder of the book examines the ramifications of accepting our human natures, and explores the common fears that drive deep distrust of it (for example that it would lead to nihilism, justify sexism, racism, inequality, or eugenics).

If these arguments seem half-baked or worse, old news, then it is the fault of this reviewer, not Pinker. This book reads as vital, and is very entertaining. 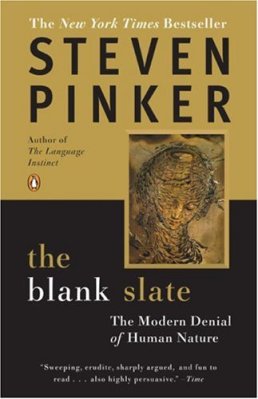 One of the most interesting chapters addresses what modern science seems to say about gender. To quote Gore Vidal – “First the bad news, men and women are not alike.” Pinker outlines reams of statistical data that demonstrate structural differences in the brains (not just the bodies) of males and females, and then the evolutionary framework that would explain them. Examples:

The list goes on and, in the context of evolutionary biology, can be explained by the different roles the genders played in our specie’s battle for survival over millions of years.

To the first Pinker answers that these traits are predominantly, albeit not totally, caused by biology. He notes that these gender traits are reflected in all primates and notes that neuroscience has documented notable differences in brains and brain development (especially in childhood and puberty). He cites case studies of girls brought up as boys, and vice versa, following sex re-assignment (for medical reasons) – and notes that every case on file experienced unprompted gender disorientation.

To the second, Pinker argues emphatically for gender equality in social policy. His thesis is this: when examining most measurable traits between men and women, there are visible differences between the statistically average man and the statistically average woman. This is neither good nor bad – it just is. This would be expected from evolutionary history. However, individual persons vary dramatically in trait and ability about the mean. Some women have spatial senses sharper than some men, some men have depth perception sharper than some women – even if on average this is not the case. To form social policy based on the statistical mean, ignoring the variability, is misguided and unfair. Thus, for example, while just because most of the world’s fire fighters are men, this does not mean we should invalidate all female candidates. If we recognise the variability within the genders, we can see that statistically there should exist females with the requisite talents and aptitude and it would be patently unfair to deny them at the starting gate.

How we formulate social policy, Pinker concludes, is a deep question worthy of debate and, like most things, there is no such thing as a demonstrably “right” answer. Science tells us that there are differences. To deny they exist is anti-science and counter-productive. The science should inform the debate, but cannot hope to answer it. For example, Pinker argues that we must pause for thought when setting policies such as positive discrimination or accepting without question common wisdom like the existence of a “glass ceiling” effect that explains the totality of income disparities between the genders.

Pinker’s arguments are contrarian and, I gather from on-line reviews, highly controversial. But it is a fascinating contribution to this most personal of subjects and sciences and I would highly recommend it.

Vincent Kelly is a regular contributor to Science Calling. He works as an actuary in Dublin, and is interested in science and mathematics, particularly applied mathematics. He has a BSc in Financial and Actuarial Mathematics from DCU.

One thought on “Book review: The Blank Slate”